Heather’s classes include a fusion of different styles of Yoga; best described as Strength, Balance and Flow, with thoughtfully sequenced breath and movement, that allow you to feel connected and strong. She loves exploring poses and letting you discover what your body can do.
She truly loves seeing her students have fun, grow in their practice and find those moments of connection during class. Heather can often be heard saying, if I can do it, you can do it!
Heather loves teaching Yoga and Mindfulness to children and seeing their strength and confidence grow as they learn breathwork and poses. One of her favorite things is when parents and teachers share how her students successfully use breathwork or yoga to self-regulate. As a mom, Heather understands that every child is different. Her classes offer a non-competitive environment; to strengthen, build stamina, work on balance and the ability to relax. Seeing little yogis relax in Savasana (resting pose) warms her heart. Heather Beltran has led thousands of hours of Yoga & Mindfulness classes and would love to have you join our community. Come discover the peace and balance Yoga can bring to your life. All levels welcome. 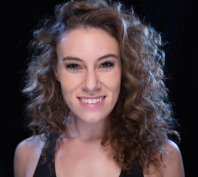 Marissa Lee Hoffman was born and raised in Los Angeles, California, and started her dance training at the age of three. Throughout Marissa’s childhood, she studied various styles of dance with many different instructors, and has preformed, choreographed, and competed with styles including Ballet, Tap, Jazz, Hip Hop, and Contemporary. She is also a certified Early Childhood Educator. Marissa is very involved in working with the local YMCA's teaching dance and fitness classes to all ages.  She also travels, working with multiple schools in the LA area, sharing her love and knowledge of dance and healthy lifestyles to children of all ages. Marissa is so excited to be teaching and assisting with the Burbank First Academy for her fifth year! 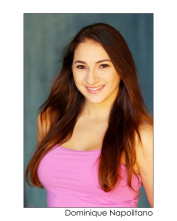 Dominique Napolitano has been dancing for 23 years. She trained at Art of the Dance Academy, Media City Ballet, and Millenium Dance Complex, She was President on the John Burroughs High School Junior/Varsity Dance Team. She has engaged in various showcases and stage plays. Dominique has experience teaching toddlers all the way up to teens. Her style comprises of Ballet, Jazz, Tap, Contemporary, and Hip Hop. On top of performing and teaching she aspires to build her resume and one day have her own dance studio. She is grateful to her loving Mother Miss Monica for introducing her to the world of dance at a young age and encourages everyone to "Dance like no one is watching!"

KiLeigh Williams, was born and raised in Marion Indiana, where she started training in tap at the age of 3. She worked under Lisa Hopkins for 9 years touring in the off-Broadway show called Tap Kids. After high school, she studied Forensic Science at Point Park University, while teaching tap for the Community Tap program at the school. She now goes back to Pittsburgh every summer and teaches at Point Park's 6-week International Summer Dance Camp. She has also taught at many dance studios throughout her career and hopes to keep passing along her knowledge of the arts wherever she goes.

Tsubasa has studied Hip Hop, Jazz, Ballet, and Contemporary for over 10 years. Since she started dance, she has performed professionally in music videos, musical theater, live and commercial performances and TV shows. Tsubasa has been teaching dance for 6 years and her goal is to create a fun positive environment for her students! She focuses on improving her student’s stamina, strength, flexibility, coordination and balance!

Marina Melikian was born into a family of pianists. Her father was a professor at the Yerevan Conservatory and her mother was an instructor of fortepiano at the School of Music. Marina was introduced to music at early age, beginning to play the piano at the young age of four years. In 1977, Marina was accepted into the prestigious Sayat Nova Music School of Armenia. During this time, she participated in a multitude of competitions and concerts, winning the first place title in the Bach competition specifically. At age 14, she earned the privilege of playing with the Grand Symphony Orchestra of Armenia. She graduated the Sayat Nova Music School with Honors shortly thereafter. Later in 1984, Marina was admitted into the Tchaikovsky Music Academy for gifted students and was once again commenced with Honors in 1989. Marina continued her music education by enrolling into the Yerevan State Music Conservatory, with a concentration in fortepiano. Her love for composing instituted her transition into the compositional department within the same institution. In 1994, Marina earned her first diploma, becoming a qualified piano performer and instructor. She additionally accomplished her composer qualification in 1995. Both achievements were granted to Marina with the highest Honors. From 1989 to 1998, Marina performed with various orchestras, participated in numerous competitions, and concentrated on genres ranging from jazz to pop music. Paralleling these ventures, Marina concentrated on her compositional work, creating pieces in the genres of Romance, Quartet, Ballet, Toccata for the fortepiano. She also composed concerts for the violin and piano together, and a multitude of other fortepiano pieces in subsequent categories. Marina immigrated to the US in 1998. She has since married and has two daughters.

Nancy Sanchez: Maestra Nancy was born and raised in the San Fernando Valley. Being brought up by parents and grandmother who only spoke Spanish, it became her first language. When she entered elementary school she learned how to speak English. She is now fluent in both languages. She is very passionate about teaching Spanish to others and believes strongly in investing in the lives of little children. Her classes and teaching methods are aimed at building a child's confidence and showing him or her that learning Spanish is fun. She personally believes that all activities that teachers engage children in should be child-centered and child-focused.  "I have a heart for teaching and strive to better educate myself in order to pass it along to others"-Maestra Nancy


Sandra Wernstrum, originally from Guatemala, has been teaching with United Methodist Nursery School for the last 15 years. She is fluent in Spanish, French, and Italian. She loves to read, hike, and do yoga. Her passion is working with children, where she provides opportunity to imagine, create, wonder, and discover creativity and freedom of expression.

Haykuhi Janbazyan (Mrs. J) is a teacher at the BFUMC Nursery School. She is very excited about her second year of teaching Cooking with us, here at Burbank First Academy. She loves cooking and baking cakes. It is very fun and relaxing for her, allowing her to use her imagination and creativity to mix different kinds of ideas and ingredients to create her own recipes. She also likes to involve her children into her daily cooking routine so they can learn about making healthy food choices. We try to incorporate the many kinds of fruits and vegetables for a healthy diet, as well as learn aesthetic decorating skills.

Mrs. J and Mrs. Bond look forward to enjoying cooking classes with your children, as they explore cooking in a fun, creative, and hands on experience!

Mrs. Bond has been with the BFUMC Nursery School sense 2007. She was a Theater Major and has always been involved with Children's Theater. Mrs. Bond also teaches our Pre-K Cooking Classes.